I read this piece – written to a friend a couple of years ago – at another friend’s 50th birthday party tonight. It was great fun to hear his laughter. 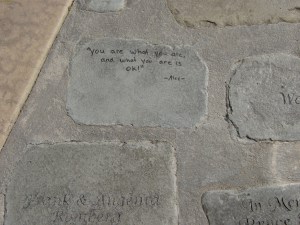 This hair dryer, a little brown plastic sci-fi movie space-laser looking thing, started giving out a few months ago, but like most problems, I ignored it in the hope it would go away. To get my attention the little motor alternated between overheating and withdrawing, the way an annoying girlfriend might. When it realized this wasn’t enough, it took up a new tactic, and would just stop running entirely. Then I would take it out of the bathroom and put it on the dining room table to remind myself to Do Something About It. But as soon as I left the room, the memory of the dying hair dryer disappeared so completely from my mind, I’d be surprised to see it still there when I returned. I would plug it back in to “test it,” and it would run normally. See? I would think to myself. It’s fine. I don’t have to deal with it yet.

One day when I was out doing errands I noticed I was near one of those multipurpose megastores that carry everything from food to tools to cold medications to toys to furniture to romance novels. It happened to be one of those days that started with me determining I needed to Do Something About the hair dryer, and for some reason I remembered it at that moment. Even so I probably would have convinced myself that a better time would come to look for a replacement, but this store also had a Starbucks, and I was on a downhill slide from my most recent caffeine infusion. Replacing the hair dryer suddenly became a noble fulfillment of my daily obligations in light of the opportunity to get a tall cappuccino.

Perhaps this is where I should explain why replacing the hair dryer seemed so odious to begin with. Partly it is because I hate shopping in those big multipurpose stores that carry everything, and these days it is almost impossible to find things like hair dryers anywhere else. Partly it is because spending even half an hour of rare and precious down time on something as trivial as a hair dryer is just plain annoying.

But mostly it was because I knew what would confront me when I finally stood in that wide, brightly –lit hair-care aisle. True, most modern hair dryers still have that space-laser shape. But none of them are plain or brown or, to judge by the hyperbole on the boxes, actually just hair dryers. They are all ionizers or diffusers or curl-enhancers or straighteners or frizz eliminators or ceramic tourmaline volume generators or some other implement that the finest scientists and engineers in the world spent years perfecting in order to make sure that, for something between fifteen and thirty five dollars, women everywhere could look like the women pictured on the boxes. In other words: surf-girl blonde, about twenty-two years old, and prone to posing with our diffusers and ionizers and ceramic tourmaline volume generators and gazing at them as if they were, well, let’s say as if they were the best boyfriend ever.

Now honestly, that is not what I want from my hair dryer. Call me crazy but all I want is something that blows warm air at my head until my hair is dry enough to be sure I won’t catch pneumonia by leaving the house with wet hair, a dreaded fate foreseen by my mother since I was very young. I don’t need it to change my appearance or my age or my life. I just want it to work so I don’t have to buy another one.

I went home that day with only a drained cappuccino cup and when my spouse asked if I’d bought a new hair dryer, I said, no. Why, he asked. Because they were all stupid, I said. But the truth was that they made me feel stupid, or rather, old. The entire rant that went on in my head as I stood in front of that shelf sounded far too much like every old person who complains that things, whatever those things are, have become far too complex since the “good old days” and describes in excruciating detail why these things, whatever they are, used to be simple and how this means they used to be better. I never wanted to be like that. I always thought I would be different, that I would remember “simple” is often code for “never let things change, or if they do, don’t make me change with them.” But here I was, ranting about hair dryers in a way that would do a crotchety old fart justice. How did that happen?

My little brown dryer hung on for another few weeks until finally all its electronic life ebbed away, in one last gasp and sigh, as it finished drying one half of my head, so that I went to work that day looking like my ADD had come on in a spasm just as half my hair was ready and took me away to some other bright shiny object before the rest could catch up.

And that meant I had to face the shelf again. I had to go to my local drugstore to pick up a prescription. I went to the Hair Care Aisle. All the boxes and pictures were the same as at the megastore, but at least there were fewer of them. I grabbed a box with a picture of a twenty two year old blond gazing longingly at a bright sparkly purple space-laser gun and didn’t pay any attention to what it was called and ran to the check-out.