Three years ago, I wrote this brief piece as smoke from wildfires surrounded our area. Now in the heart of another fire season, I wanted to share again this reminiscence on a friendlier version of flame. 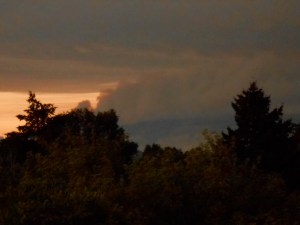 Sunset and smoke from the Table Mountain Fire, as seen from Ellensburg, Sept. 19, 2012.

As the deep red glow of sunset is replaced by the deeper, redder glow of burning wood, the two faces become more and more alike. It might be a trick of the firelight, or it might be how the affinity between their two hearts becomes more visible in the dark.

In the shadows outside the circle of light cast by the fire, sparks glitter on their upward journey to extinction; and figures begin to dance, figures conjured by the brothers’ conversation: a bastard of a father, a haunted mother, a missing sister; and the figures of hope, fear, pain, success, sorrow, love, joy. These figures dance with the sparks, grow and subside with the flames.

And laughter. The two brothers love to make each other laugh, and the more they do, the less distinct they become, until in your smoke-stung eyes they are nearly one man, one laughing, crying, loving man.

This is just one kind of magic cast by a good fire.