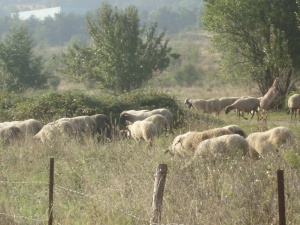 Sheep and a goat out for a morning graze in Pravetz, Bulgaria

On my first morning in Pravetz, Bulgaria, I took a walk toward the edge of town. Keep in mind that “edge of town” is a relative concept when the town is this small. Before long I encountered a flock of sheep heading into a little field to graze. There were one or two goats, too, and one of them followed me for a little while, kind of like a stray dog or cat will, you know, staying a few steps back but definitely following. It was wearing a bell and I could hear it clanging behind me. The sheep spread out in the field and one was a bit more assertive than the others and came to the roadside to say hello. I said hello back while trying not to draw the attention of the shepherd who was talking with another man in a horse-drawn cart. I was unsure of the sheep-traveler protocol; are you supposed to leave them alone, not distract them from their grazing? If one decides to visit you, will the others follow like, well, like sheep? Could chatting with a ewe suddenly trigger some kind of sheep stampede?

The shepherd began to yell at his flock, or so it seemed, since I don’t speak Bulgarian he might have been yelling at me. So I whispered to the ewe, go on back to your field, we can talk later, and hurried on my way.

There are wolves here too, but they aren’t the four-legged kind. They provide a strange kind of mirroring of  themes in the book I’m writing that I didn’t anticipate. I hope to say more about that later when I get back to a writing routine.