“Would you want to read this book?” On August 6 that’s the question I’ll be asking as I meet literary agents and publishers at the Pacific Northwest Writers’ Association conference. It doesn’t matter to me if they are only being polite when they say “send it to me,” as long as they say it. Time to practice my pitch… here it is; tell me if it would make you want to read this book, which dedicated to everyone who has ever looked at her boss and thought, you must be from another planet. 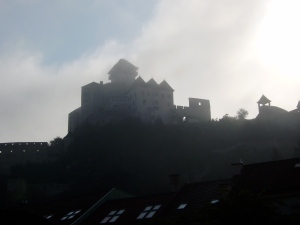 In the oldest part of the castle, Jack and Louie were cornered, and they knew it.

Nearly Impossible and Completely Absurd is the story of Louise Armstrong Holliday, the last person on Earth you’d expect to risk everything to save the human race. But in the face of a half-baked plot concocted by stupid but brutal aliens trying to create the largest cyborg army in the galaxy, Louie (don’t call her Louise) launches herself on a journey from a suburban Seattle business park to an ancient European castle, ending in her own forgotten past. Helped by a slightly mysterious co-worker and a blind mini-Schnauzer from Mars, she must conquer her worst fears and her oldest enemy, if she will ever find her way home.