The Fourth of July in the United States is “Independence Day.” So it’s a nice ironic joke to find oneself attacked by the gremlins of loneliness on that day.  (They taunt us, convince us we are doomed to be alone, forgotten, left out, unwanted, now and forever, amen. (There are also Gremlins who whisper and shriek in our hearts of the permanence of Fear, Doubt, Guilt, Sorrow, and Pain. They feed on despair, and work hard to nurture it. They know it grows lush in isolation and secrecy, so they turn us inward, on ourselves, spitting “no one will understand or care” on our open, appealing hands.)

Loneliness is rarely cured by being around large groups of other people; hundreds of them in a town park celebrating Independence Day would typically serve only as a foil, intensifying feelings of being alone.

Except when there is good music.  Good music is, now that I think about it, one of the best weapons against the Gremlins of Loneliness, Fear, Doubt, Guilt, Sorrow, and Pain. Good music doesn’t obliterate our emotions; it takes us into them in ways that bring perspective. Good music moves us, emotionally and physically. Watch little children dance at any live music venue. They can’t help it. They have to move, wiggle, clap, kick, shimmy, bounce, jump, roll. And they have to smile while they do. 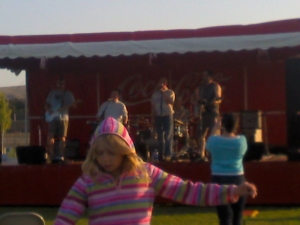 Avolition, the Ellensburg-based band staffed by some good friends, is always a promise of good music. And sure enough, at their set at that Independence Day community celebration, the little kids are up and dancing by the second or third tune.

Avolition (Mike Hougardy, singer/songwriter/rhythm guitar/construction manager; Mike Nelson, vocals/percussion/audience participation manager; Andy Clemen, bass/Bon Scott impersonator; Dan Leavitt, lead guitar/harp/Fender wrangler; and Rob Fraser, drums/percussion/fine photography) was in fine form for Independence Day, despite some trouble with the outdoor sound system. Speaking of ironic cosmic jokes, the vocal microphones cutting out on a song entitled Silent Vowels has to be one. (Kudos to the sound team from Central Washington University, who seemed to solve problems as soon as they occurred, without ever losing their good humor.) Old favorites like Boom Boom Boom and Little Mary Sunshine swam through the summer air with new originals about desire, denial, fate, and bodies burning on beaches, bumping every now and then into a cover (Billy Joel’s You May Be Right always seems to get adults and kids clapping; and Avolition’s cover of Take Me to the River reminds you that it was composed by a Reverend). They let some gorgeous young girls play tambourine and shaker on stage (let? can seven-year olds ever truly be denied anything?). This is what a community celebration is all about.

And the loneliness fades quickly. Watching the little girls in swirly dresses, little boys in shorts and tees, watching their favorite grown-ups either dance with them or beam at them, the Gremlins of [Fill in the Blank] find their voices hushed. It’s as if even the Gremlins are captivated, perhaps moved, by good music. Perhaps the Gremlins are as eager as we are to dance along, to be released from the permanence of loneliness, and they’d rather turn their voices to song.

Or maybe rock and roll cures all. Who knows? Not me. I’m just glad I went.

(Shameless plug: Chase your own Gremlins by booking Avolition: bookavolition@yahoo.com.)