Leather Soul with the beautiful and talented Amy K

This week’s Project Create, and, as usual, it ain’t just a music review. How could it be, when the twelve hours of music I want to describe took place as part of a motorcycle rally, the first I’ve ever attended? There’s probably a novel’s worth of stories to come from this weekend, the Lava Run to the Sun in Soap Lake. I’ll try to focus. Really, I will. But I’m most likely doomed to fail.

At some point during a concert, or music festival like the one I attended this last Saturday, a theme usually presents itself. I’m pretty sure this one came to me about the same time one of my musician friends said “If I don’t read about that in your blog, I’ll be disappointed.” He was referring to a contest in which the object of the game was for a woman riding on the back of a motorcycle to grab a hot dog that was hung from a cross bar with her teeth. I won’t paint too much of a picture because I think you can do that yourself. As the teams competed the hot dog was dunked in some kind of disinfectant, we hoped, between attempts. 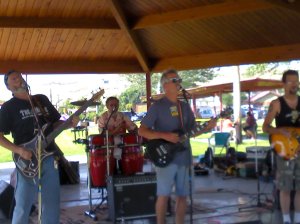 At around the same time, in another part of the big beautiful park at the south end of the big beautiful Soap Lake that is in one of those big beautiful basalt canyons left by the glaciers so many years ago, a group of about eight beautiful children were dancing to some beautiful music. After two local bands opened the day, Ellensburg’s own Leather Soul, the Panindias Brothers, and Avolition took the crowd into the night. (Somehow, the fellas in Leather Soul and Amy K – who provides the big, beautiful vocals for them – recovered enough to do another fantastic three-hour set at the local watering hole, the Del Red.)

Each band has its own sound. Leather Soul rocks and blues, Panindias Brothers groove and harmonize, Avolition sings and soars. Lots of original music was played in that park, stuff you won’t hear if you don’t show up. Songs worth showing up for, songs about love, loss, fun, fear, pain, pot, spots, spirits, prayer, moons and animals who sing.

It’s always A Moment when the first little kid gets up to dance – and this group of gracefully goofy boys and girls provided lots of ‘em. Dancing in circles, in lines, in twos and threes and all together, and hauling grown-ups out to “show us how to dance,” as one lovely dark-haired girl asked me, as if they needed to be shown anything, as if they weren’t already expressing the gift of music through their skinny arms and legs and shaking their heads and hips and smiling and laughing, but okay, I thought, I’ll go out there and be just as silly, though nowhere near as skinny.

Oops. See? Lost focus. What I wanted to say was, the contrast of the bikers and the children hit me when my friend made his comment, and reminded me of a line from a song: “innocence, experience mean nothing now.” Child or biker, musician or sound guy or audience member, we were all out there to enjoy these moments in one another’s company, and summer blessed us with the chance to do just that.

PS. It turns out Abe, the sound guy on the right, is also a good enough dancer to make me look like I know what I’m doing when he took me out on the floor for the last song of the night, Leather Soul and Amy K rocking us out the door of the Del Red. Thanks, Abe!

One thought on “Innocence, Experience”